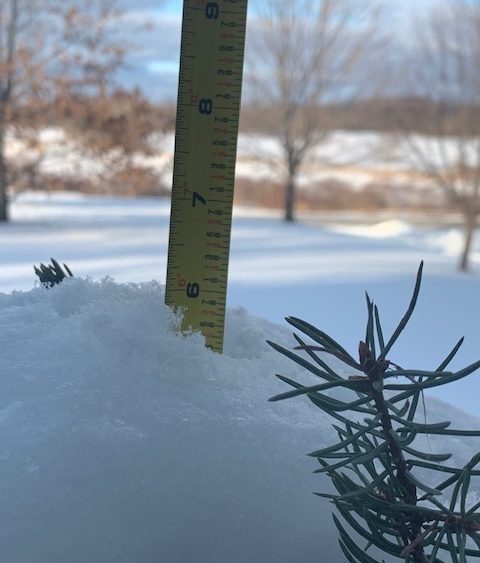 It’s such a little thing, one snowflake! But then the weather forecaster said, “We expect about seven inches before morning.”

From one flake of snow to — seven inches= big difference.

Isn’t it interesting how one little thing multiplied can mean big change?

As an example take exercise, one push-up. The first time I was directed to do Ten push-up’s I gasped with fear and trepidation. Now ten push-ups are part of my   beginning, a warm-up to workout.

Noticing other people and being more keenly aware of their circumstances is the same way.

Just before Christmas, I was shopping at a very large grocery store, one I avoid unless I need something unusual and I think they might have it. This day I was looking for powdered egg whites. I passed up and down the crowded baking aisle several times. I am only 5’2” and the new system of higher shelves leaves many items not only out of my reach, but if the first item has been removed I cannot see what the remaining items are. After a lengthy search, a tall woman probably in her thirties inquired what was the item I was seeking. I told her powdered egg whites and explained the type of container. She smiled.

“Excuse me a moment, while I move my cart to the end of the aisle and I’ll come back and help you search.” She returned and we continued our search. We considered using the red telephone to ask someone where the item was located but decided because it was four aisles away we would continue to search. We searched the Internet for the product and found a picture, but no such item appeared anywhere on the shelves among baking supplies. We parted with a friendly wish to each other for a nice holiday season.

Those minutes she attempted to help me were a gift, something she didn’t have to do, bother with another lady searching for a particular item, but she did. She took time from her own shopping, moved her cart out of the way so it wouldn’t cause anyone any inconvenience and tried to help me. What a rare and precious gift she gave me. HER TIME!

I’ve helped others in the store before, (in truth) if it was easy and convenient to do so, but I have to say I have never gone to the extent this woman did. She taught me graciousness. She taught me to offer to help someone when it is not convenient but to do so in such a way as to not inconvenience others.

It’s a rare day when I don’t learn something new and it’s a special day when God opens my eyes.

One snowflake=seven inches of snow.

One kind gesture=unmeasured gestures of kindness.

May your day land Jelly-Side-Up